It is not surprising that the South African documentary “My Teacher Octopus” is nominated for the Oscars, after winning the British “BAFTA” awards and other prestigious film awards, in addition to being a top position among the most watched documentaries on the “Netflix” platform. The production is him, due to the large number of cinematic and aesthetic work it contains, and to the strangeness and uniqueness of his story as well.

The story of the film revolves around a strange friendship between film director and diver “Craig Foster” and a marine octopus in the ocean waters. Directors Peppa Ehrlich and James Reed took care to transfer the story to the screen, and it required them to photograph hundreds of hours under cold water, to document With remarkable accuracy, the hidden world of the octopus, transmitted with the eyes and voice of the diver, thus narrating the friendship that brought him together with the female octopus and affected his life and changed many of them.https://www.youtube.com/embed/3s0LTDhqe5A?version=3&rel=1&showsearch=0&showinfo=1&iv_load_policy=1&fs=1&hl=ar&autohide=2&wmode=transparent

Childhood next to the ocean .. the beginning of the story of love for nature

The documentary removes the illusory separations between the fictional and the documentary, by making room for the narrator, to convey his feelings and feelings with high accuracy, and introduces aspects of his personal life into the folds of the story, and thus their relationship (the octopus and the diver director) overlap to the point where it is difficult to separate them.

The diver begins in the opening of the documentary by transmitting chapters from his personal biography, focusing on his relationship to the place in which he grew up, and their home located in the far southwest of the country near the Indian Ocean, and this part of it is known by the strength of its sea currents and its high, collapsing waves that used to reach its threshold.

Craig loved nature from a very early age, and was always curious about its secrets. That is why when he grew up he took interest in filming it and made several films about it, including: “The Great Dance”, and for him he traveled to the central Klahari desert to document the traditions and customs of its peoples He paid attention to their broad knowledge of nature and their compatibility with it.

A foreign body surrounded by sea snails, in the depths of marine forests

Long years of travel, tiring cinematic work, and a continuous break from the family, which led to an increase in the tension of “Craig” and chill his relationship with his son, and as a result he decided to take a long vacation from work to restore some of his balance. Quickly with the ocean and his visit to its depths was organized without oxygen packages, he learned early to dive without it, relying on the technique of holding breaths inside the water and ascending to its surface whenever he needed natural breathing.

After a period of relaxation and tranquility, Craig returned to photograph the depths of the water. He went to deep places inside the seaweed forests, and watched the marine life moving in harmony in the midst of it, but on one occasion he turned to a spherical foreign body surrounded by shells of sea snails, so he tried to approach him. But the object inside the shells shrank in fear and withdrew.

Something strange prompted “Craig” to dive in the same place every day, so that he left his camera near the burrow in which the shell disappeared, to record its movement in his absence, and he noticed that she moved it from its place, as her curiosity prompted her to do so, and after a month of diving, it became She goes out to greet him whenever he approaches her hideout. 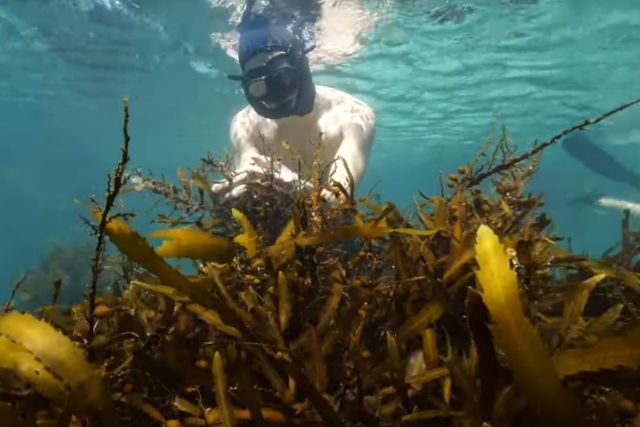 “Craig” describes the moments of his meeting with the octopus as strange moments, especially as they originate from a simple marine creature, which he uses as a means to express his confidence in him. His frequent visits and accompaniments have led him to the dense sea grass forests that are difficult to swim in, but for the octopus it was an ideal place for fishing .

The ingenious photographer “Roger Horrocks” conveys the seascapes in the most wonderful and sharpest image, capturing the clarity of detail captured by highly sensitive cameras in the deep sea; Attention to the tremendous development in the camera industry and to the skill of its users.

Craig’s constant observation of the octopus and his presence near it increased his conviction that the octopus is one of the smartest marine life ever, and the most curious and love to learn. Over millions of years, it has acquired an innate experience to adapt to its surroundings with all its dangers, and learn wonderful camouflage methods and amazing hiding methods in their ingenuity.

Al-Rawi recounts an experience that demonstrates this. After nearly two months of friendship with her, while she was very close to him, his diving glasses fell from his head, and she suddenly felt fear and fled, and the search for her did not bear any benefit, so she left her usual place and went to an unknown place.

Mediator to improve the relationship between father and son .. Return of the octopus

After the octopus escaped, Craig began an exhausting journey of searching for her, and the desire to know her new location would lead him to study her habits and ways of life theoretically. He devoted a long time to determining the places of her hunting, until he found her a great effort, and it is strange that she returned and approached him without fear of him. As she approached him from her joy at his return again.

“Craig” reviews what he read briefly and what he learned theoretically about the life of the octopus, as it strengthened his conviction that he was standing in front of a marine creature that was not normal, and that everything he knew about him was superficial, and he felt the meaning of true sincerity and intimacy. By him and explain to him what he saw under the water of wonder. 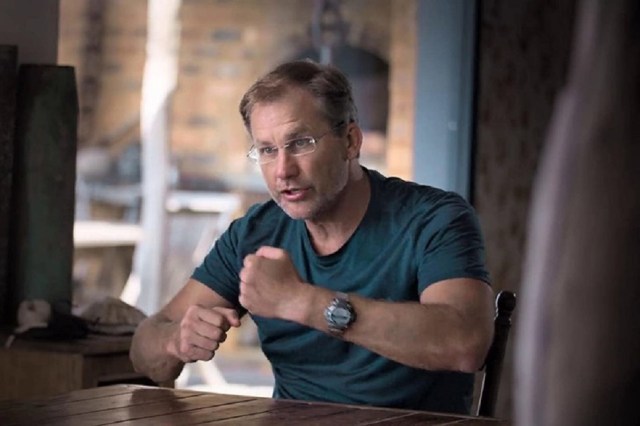 Narrator of the movie “Craig Foster”

In the presence of the night skilled hunter .. hunting plans

Craig realized with the days that his presence with the octopus teaches him many things, so he decided to know his skills up close and through direct inspection.

The octopus is considered a skilled night hunter, as it is able to use about 2000 tentacles in its body without the slightest functional conflict between them, and it has the ability to change its hunting strategies according to the condition in which it finds itself.

The documentary records his unique hunting operations of difficult species of oysters and shellfish, and ways to avoid potential risks and the most deadly ones. Sharks have a very strong sense of smell that helps them know their locations and uncover their most secret and fortified hideouts. This is what Craig saw during the more than 100 days he spent with his trusted girlfriend.

Throughout the show, documentary makers pair Craig’s words and personal impressions with a wonderful portrayal of marine life, accompanied by a soundtrack by artist “Kevin Smuts”, to increase the spectator’s sense of the magnificence of the scenes that are rarely conveyed in front of him with this wonderful richness and serenity. 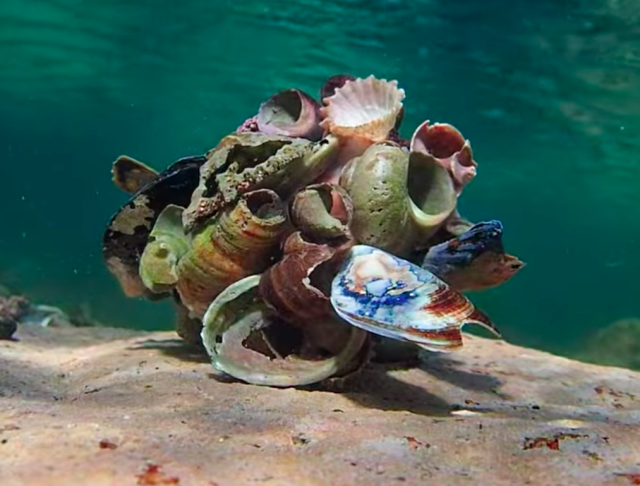 Confronting sharks .. methods of defense and compensation for losses

The diver discovers the exceptional ability of the octopus to face difficulties, and how his body has adapted to the dangers that beset him over millions of years, and describes the state of amazement that befell him while watching a hungry penny. The shark gnawed at one of its eight arms.

“Craig” thought that she would die after staying for a whole week in the hideout without moving, but while inspecting the poor condition that she arrived at, and his feeling of sharp remorse for not interfering to prevent the shark from attacking it; Notice there is a slow movement, and when you get closer to it, notice the growth of part of the new arm instead of the old one.

Within about a month the octopus returned as it was, and started searching for food, and not long after another penny came back trying to devour it, but this time it used a strange way to defend itself, as it jumped while sheltering inside the shells of oysters like a sharp-edged ball over its back, and not The shark understands what is going on and leaves it after it has given up on its hunting.

Mother’s sacrifices … lessons of persistence, defiance and love of life

The octopus resistance methods and attacks and its intelligence in dealing with risks prompted the diver to think about his situation and his extreme weakness due to work.

The narrator contemplates the idea of ​​death and clinging to life calmly, after he saw with his own eyes the approaching octopus to death, but nevertheless she clung to life, and when she was healed she did not give up or succumb to the ferocious sea monsters, but she resisted in the way of continuing her life that does not exceed much one year.

The documentary reaches a dramatic point by seeing a male octopus near her, and days later she entered her hiding place and did not leave it. Craig realized that she was grazing her eggs until the time for them to hatch near to complete a normal life cycle, but the strange thing is that the octopus sacrifices itself and dies in order to give life to its children.

Craig watched her shrivel and shrivel, and when the eggs hatched they were completely destroyed, and a shark came and ate what was left of her lean body. 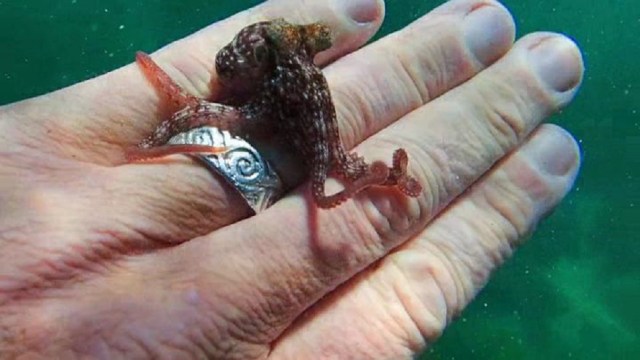 Octopus is a great night hunter, able to use about 2000 probes in its body

Ibn al-Akhtaboot in the hands of Ibn al-Ghawas .. The inheritance of knowledge

The sacrifice made by the octopus for the sake of the sustainability of life teaches the diver new values ​​and motivates him to reconsider the world around him, so every important life for him, no matter how simple it seems, has become, and his vision of the marine world is deepening more and more. He was now clearly aware of the meaning of the amazing ecological balance of marine creatures.

During the diving of “Craig” and his son together after the death of the octopus, a while the son found an octopus small, so he took it in his hand and started caressing him, and then the father realized that perhaps this is one of her sons on his way to grow up and become smart and brave like her, as he wishes his son to be so, inheriting from him a love of diving and nature. And photography and getting to know many small creatures surrounding us, and there is nothing wrong with establishing a friendship with them.