Cities have stories and stories whose words are written by man, and their details recount buildings and places over time, and inheritance has value and status that show the history and culture of civilizations that have passed on this earth, and Muscat, like other ancient Omani cities, was the kiss of researchers and the destination of writers and thinkers throughout the ages.

Bahia Al-Athoubiya, a researcher and specialist in the modern political history of the Sultanate of Oman, is inspired by the buildings and archaeological sites of Muscat, as she meets in these interests of the popular poet Mubarak Al-Selti who accompanies her on this tour of the heritage of Muscat.

The result of this inspiration, formulated by Dr. Baheya, and by the distinguished efforts of a group of young men and women in Oman, a film produced by the Al-Jazeera documentary channel, which was presented in the series “Heart of a City, Muscat”.

The cities of Oman were made with the glory and glory of the Omani man, for he was the one who carved the rocks, split the valleys and dug dirt for his palm seedlings. As a result of that, cities of a prominent economic and political stature arose. In search of inspiration that delivers him to the indisputable truth.

Muscat was called this name because it was fallen between the mountains, and this is what gave it its strategic and historical position over time, as it is fortified with mountains, full of castles and forts, and is open to the world from the widest doors; Gulf of Oman.

Dr. Bahia tells the stories of the covenants that passed over the city and the imams who ruled it, then turned it into a capital during the reign of Imam Muhammad bin Said, then about its urban and cultural development, and the writings that historians and travelers from Arabs and foreigners wrote about the city itself and the ethics of its residents, its port and its economic and military importance. And about the period of the Portuguese occupation, and their expulsion by Imam Sultan bin Saif the First.

While the Salti poet sings about his majestic city, through popular verses in which he says:

We sold and bought Al Ghazi
what he was suspicious of

Bab Al-Masaid .. a gateway to the Omani heritage

Here is Bab Al-Masaeed, one of the four gates that protect Muscat, and this is the Palace of Alam, which is also the palace of government, and in the background appears the entrance to the Gulf of Oman, where the Mirani Castle, Jalali Castle, or Eastern Kut, and Western Kut, as the name was previously, and here the Salti poet remembers the existence of an old popular market that was sold It contains water by the porters “Al-Toyan”, before the city is supplied with the water network.

Dr. Bahia and her team do not miss the passage of folk arts and some dances such as the Razha and Al-Azzi dance, which are held on holidays and public events, and those marine arts that Oman’s youth are famous for and are proud of, such as “Al-Madima” and “Al-Shaibani”.

Omani folk arts depend on the kindness of word and rhythms mixed with folk dances, and with the sword, shield, dagger and rifle they form a painting of pride and pride when the Omani man imitates and flaunts them. Muscat and Muttrah was the destination of Omani artists throughout time, and from all parts of Oman.https://www.youtube.com/embed/Qmm_pmowgF8?version=3&rel=1&showsearch=0&showinfo=1&iv_load_policy=1&fs=1&hl=ar&autohide=2&wmode=transparent

Omani sweets .. Ambassador of Muscat to the world

If you visit Muscat, you must taste the Omani sweets whose fame has reached the horizons, and do not tell you about it like an expert, and here we meet Mr. Murshid Al Hosani, the owner of one of the most famous and most prestigious sweet shops, where he says: One of the rituals of hospitality and honor in Muscat is to offer coffee and Omani sweets, and this sweets are one of the most important Characteristics of hospitality in Oman, a long-standing heritage.

Al Hosani adds: Omani sailors and explorers used to take this sweets with them on exploration, trade and Islamic advocacy trips and present them as gifts and souvenirs all over the world, and an Omani house is hardly devoid of special Omani sweets on occasions, holidays and weddings. Caper, we cherish it and pass it on to our children.

Regarding the way sweets are made, Al Hosani says: The secret of the success of the product is the continuous stirring of the mixture, and it takes about three hours to prepare it on the fire, as for the main ingredients are saffron, which gives the grainy color, delicious taste and distinctive flavor, then cardamom (cardamom), rose water, ghee or butter and Omani starch. And local red sugar, then garnished with various nuts and served with Omani Arabic coffee.

Sweets were the source of our happiness when we were young, and just hearing its name would bring endless joy to our hearts, especially since it was served on separate occasions, and not every household could buy it on ordinary days, and it was served in Ramadan according to special rituals, and it was offered black and yellow, but now Omani housewives and young women are adept at presenting them in various modern shapes, colors and flavors 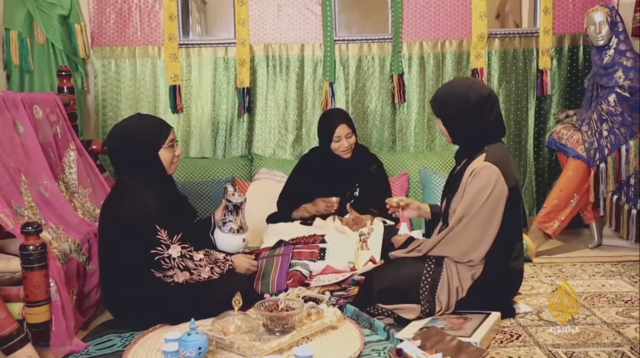 “Women Sidab” initiative … so that the heritage is not lost

Muscat is famous for its cultural richness and palpable heritage through the handicrafts and cottage industries practiced by women in Muscat, such as sewing the Omani cap (the Omani cap) and the fronds and sewing Omani costumes of all kinds, and on wedding occasions, the neighbors would gather in the neighborhood and sew everything necessary for the bride to be in terms of clothes, textiles and brushes.

Girls learn the profession of weaving, knitting and embroidery from their mothers and grandmothers, and teach them to their daughters when they grow up and get married, and Omani activists pledge, through associations and other community signs, to preserve this heritage from disappearing.

One of these women’s initiatives in Muscat is the “Women of Sidab”, which is a women’s social initiative in the village of Sadab in Muscat, where they meet to work Omani traditional industries in order to preserve the authentic heritage, as well as to secure a parallel income for housewives. Night of Henna, an ancient heritage in Muscat, women today try to restore its value and place in the hearts of young brides. 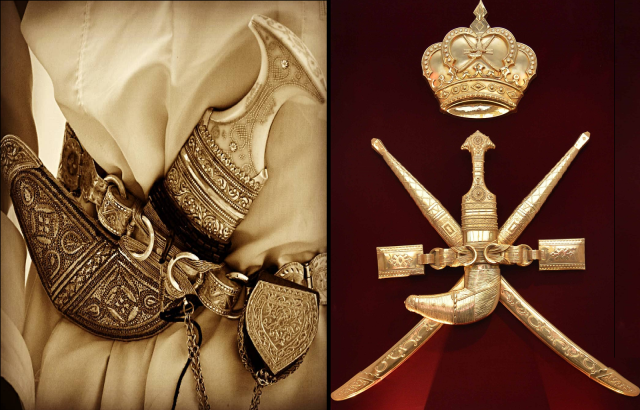 Al-Khanjar Al-Saeedi, the symbol of the state, heritage and Omani prestige

The Omani dagger … the ancient title of courage and glory

In addition to traditional industries, Muscat is famous for its silver and jewelery industries, at the forefront of which is the authentic Omani dagger. The “Youssef Soumar” family is considered one of the oldest goldsmiths families in Muscat and Muttrah.

The handle of the dagger is often made from the bull’s horn or the buffalo horn, and some of them are sandalwood, and the Saidi dagger is one of the most famous types of daggers in Oman, and its distinct inscription was dedicated to the masters of the Al Said family, and it is made entirely of silver and has its own belt of silver as well. The blade is made of stainless steel that can be hardened to be very sharp. 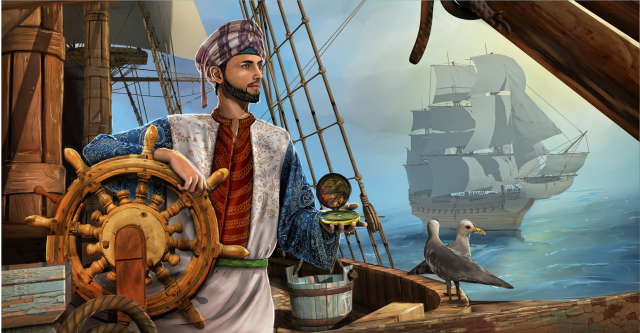 The trade of the tracts … the profession of coastal peoples

If you talk about fishing and fishermen in Muscat, then talk and there is nothing wrong with fishing. Fishing is at the forefront of the traditional crafts of the people of the city. In the sea from winds and hurricanes.

One of the skills of fishing is with the hook “Al-Zana” or “Al-Likh”, and the size of the net and the durability of its strings depend on the type of fish to be caught. There are kingfish, tuna and omission of large fish, and there are many other types of smaller fish. 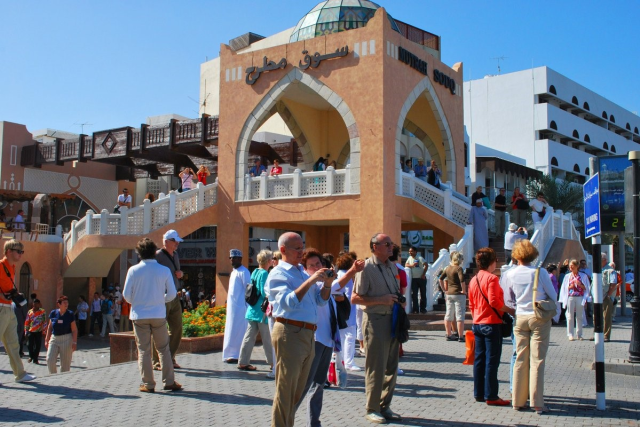 Muttrah is the economic lung through which the Wilayat of Muscat breathes. It is full of trade and a homogeneous and coexisting mixture of multiple nationalities live in it.

And to Muttrah, an American mission came in the late eighteenth century, and built the first hospital there, and the Western element entered with the Omanis heavily when oil was discovered, and all forms of artisanal, commercial and economic production of Oman gather in Muttrah, and from all its governorates. 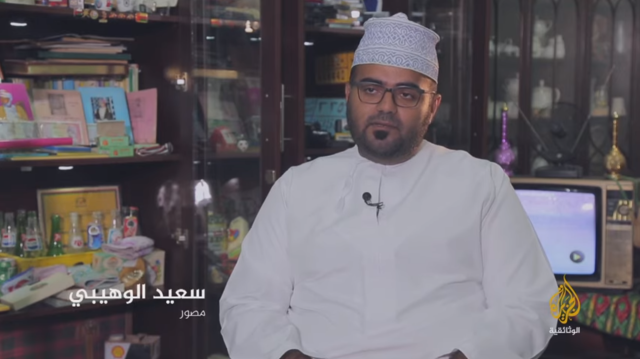 Saeed Al Wahaibi, a lover of collecting antiques and old souvenirs, owns a museum in his house

Preserving antiques and souvenirs … a glory tale that has no conclusion

On our tour, we meet Mr. Saeed Al-Wahaibi, who is a photographer and collector of ancient classic pieces of coins, antiques and other souvenirs. He mixes the profession of photography with collecting souvenirs. Followers and viewers.

Even if the newspapers are folded and the writers’ pens dry up, Muscat remains an endless story, and history records itself at this moment, for Muscat is hardly without the legacy of a witness, and a glory that proudly boasts that it is part of an ancient cultural product that tells the grandeur of the city and the stories and stories it holds for generations .