In the era of the 1950s and before, the reciters ’stardom began on the Egyptian radio station, and no sheikh’s recitation was broadcast before the Qur’anic competitions were led and his merit was recognized by the leading scholars in Cairo al-Mu’izz.

However, the matter was different with regard to a young man coming from the center of the facility in Sohag governorate, as the radio crews moved to him to record his reading without him seeking to do so.

This boy is Sheikh Muhammad Siddiq Al-Minshawi, whose story with the Qur’an is narrated by Al-Jazeera documentary in an episode in the series “Voices from Heaven”.

Al-Minshawi was born in 1920 to a Quranic family in Upper Egypt, as his father Siddiq was one of the most prominent readers of his time, and his reading was famous in Egypt and abroad, and so was his grandfather Tayeb, a Quranic man.

Muhammad Siddiq al-Minshawi completed the memorization of al-Karim in the village’s kuttab when he was eight years old, and later he moved to Cairo and studied the science of readings with the sheikhs.

As soon as Al-Minshawi began reading in the mosques, his fame spread in Egypt, and the Sheikhs of the Qur’an expressed their astonishment at the beauty of his voice.

In a precedent of its kind, the Egyptian radio station moved to Al-Minshawi to record his reading after the sheikhs of the Qur’an confirmed at the time that it was a shame to subject him to the test.

In their participation in the Al-Jazeera documents, sheikhs talked about the divine fear in reading Al-Minshawi and his ability to convey the meaning of the verse to the listener through the voice, and they testified to him of piety, met, asceticism and sincerity.

Journalist Mahmoud Khalil says that Al-Minshawi did not aspire to stardom, but he was sought after by fame and the radio sought his feet.

He added, “Sheikh Al-Minshawi was modest, far from vanity, and he did not search for a reward or a position and did not lead a front.”

And his son Saudi tells about his help for young people in reading the Qur’an and about his modesty and not wearing it, which distinguishes him from the public, to the extent that one of them asked him once whether he was the gatekeeper of architecture, and he replied: Yes, I am.

After the participants talked about his asceticism and his reluctance to the world, the documentary returns to Al-Mashawi to read the Almighty’s saying, “And the servants of the Most Merciful who walk from the earth are here …”, while he appears in a picture seated in a simple way and wearing a normal dress.

On the authority of Sheikh Al-Minshawi, he is affected by his reverence in the hands of the Qur’an and his lack of eyesight throughout the recitation, an embodiment of the meaning of the noble verse: “If we sent this Qur’an down on a mountain, you would see it humbled and cracked out of the fear of God.” 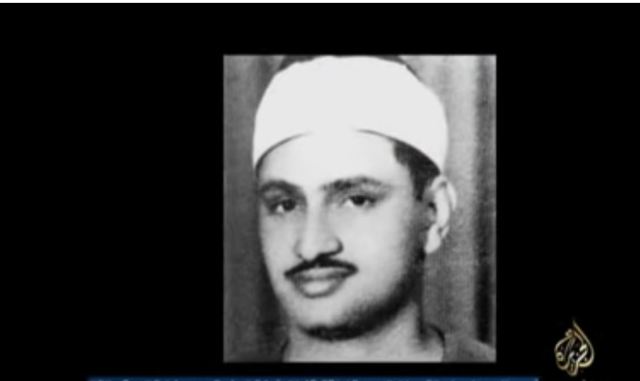 Sheikh Al-Minshawi compiled in his reading all the features of beauty, and he used to recite the verses of preaching the joy of the heart

The dean of the Faculty of Musical Education at Helwan University, Dr. Atef Abdel Hamid, says, “The melodic fabric of Al-Minshawi can perform a sentence of a minute or two on four vocal degrees so that it weaves the sentence very precisely, which is not traditional for the rest of the readers, and this is called decoration and rise and fall. “.

No two people disagree that Sheikh Al-Minshawi combined in his reading all the features of beauty, and he used to recite verses of preaching the joy of the heart.

He often recites the Qur’an at the Maqam Nahawand and travels from it to Nahawand al-Musa’a, while he used to perform the call to prayer in the shrines of Rast and Hijaz.

Journalist Mahmoud Khalil says, “He is the purest and finest ambassador of the Book of God Almighty and Exalted,” as he read in the blessed Al-Aqsa Mosque and in Kuwait, Syria and other countries.

Abdul Hamid describes Al-Minshawi’s voice as “expressive, sincere, warm and strong,” while Khalil says, “When his turn comes, I feel that irrigation will flood the valley.”

On the twentieth of June 1969 Al-Minshawi passed away at the age of fifty years, to live after that his second life, his voice still scents around the globe and soars people in the worlds of faith, fear and love.