She wasted, and I would not, if you wish, to be distressed and miserly,
except in the good

Your
desires are forbidden, and every good person who is not forbidden to contact is easy

According to the revelation of your deceased person
, hearts are eyes

He complains of abandonment and deprivation, and at the same time he is satisfied with his destiny, and intransigence increases him with love and love, to suffice with the inspiration of heart and his ability to imagine the connection with the beloved.

And this wandering orphan is the same one who writes, “The falsehood never finds its power in its nature.

From here we understand that Mustafa Sadiq al-Rafi’i was not one, but rather a knight fighting battles on several fronts. He wins one, holds up in a second, and takes a painful blow in a third, but he does not give up.

Mustafa Sadiq al-Rafi’i was born in 1880 in the Egyptian province of Qalyubia to a family of Syrian origins affiliated with the Rashidun Caliph Omar Ibn al-Khattab, may God be pleased with him. His father was a jurist and a great judge.

At an early stage in his life he memorized the Noble Qur’an, and as soon as he reached fifteen years of age, his genius spread in the cultural milieu.

Before the poets woke up from this shock, Al-Rafi’i stripped his sword to fight writers, historians, thinkers and journalists, and presented himself as a supporter of conservatism and a defender of Islam before the agents of Westernization and Orientalism.

These battles are narrated by Al-Jazeera documentary in a movie entitled “Al-Rafi’i … the neighborhood of the pen”, which was broadcast in early May 2019, and included insights, analyzes and testimonies of many critics and writers from Egypt and other Arab countries.https://www.youtube.com/embed/q_2dPXR2m4A?version=3&rel=1&showsearch=0&showinfo=1&iv_load_policy=1&fs=1&hl=ar&autohide=2&wmode=transparent

In his speech in the documentary, the Jordanian poet Ayman Al-Atoum notes that the family legacy played an important role in shaping the personality of Al-Rafei, and that the feeling of self-worth was present in his literary path.

The poet and translator Hanin Omar narrates that Al-Rafei contracted typhoid as a child, lost his hearing and had to leave school.

However, hearing loss was not deducted from the child’s genius, as the literary critic Ahmed Karim Bilal notes that this situation only pushed him to isolate and recite into reading.

In his childhood, Al-Rafi’i memorized the Noble Qur’an, studied jurisprudence and hadith, read literature and translations, matured his mind at the age of fifteen, and became a cultural arena.

Researcher and critic Walid Kassab comments on the exceptional genius of Al-Rafa’i by saying that he wrote the play “Hosam El-Din Al-Andalusi” when he was sixteen years old.

In his nineteenth year, he issued a poetry collection, which was a reference to an important writer and poet in the Arab arena. The second part of the collection reflected that the man is able to restore to the Arabic language its lost glories.

In 1905, Al-Rafi’i confused the cultural arena in Egypt and the Arab region, as he wrote an article on the arrangement of contemporary poets and leaked it to the press without signing it in his name.

And in the first layer he placed Abdul-Mohsen Al-Kazemi, Mahmoud Sami Al-Baroudi and Hafez Ibrahim, then he attached them to his name, while Ahmad Shawqi, Khalil Mutran and other stallions of the poets of those days came to the second layer.

Al-Thuraya magazine published the article and wrote that it was received by mail from an unknown destination and pledged to publish any response to it.

It was not lost on the poets that Al-Rafi’i wrote the article, and the writings deplored and rebuked the young man who aspired to place his name among the writers of the first grade.

While Hafiz Ibrahim replied that he would ask the “unknown person” to put his name in the second layer so that he would remain among his friends, Al-Manfaluti rebuked Al-Rafi’i and accused him of seeking to place his name next to the great poets, and he was pleased with that.

Whatever it was, Al-Rafei succeeded in drawing attention to him through self-esteem and vanity. With this fabricated issue, he placed himself in the first row, so people searched for him and talked about him.

The emergence of the name Al-Rafi’i in the Egyptian cultural milieu coincided with the intensification of the intellectual debate between conservatives and modernists.

Consistent with his scientific and family heritage, Al-Rafi’i sided with the conservative movement and was a supporter of the classical school of literature, attacking Taha Hussein and accusing him of defaming religions and denying history.

When Taha Hussein questioned pre-Islamic poetry, Al-Rafi’i and others saw that it was offensive to the Qur’an due to the fact that it contained verses confirming its superiority in eloquence and rhetoric over the poets.

In a book titled “Under the Flag of the Qur’an,” Al-Rafi’i wrote many articles attacking Taha Hussein and denouncing him for foolishness, blindness, and tracing the orientalists without guidance or scrutiny.

Osama Abu Talib, a professor of criticism and drama, says that Al-Rafi’i’s response to Taha Hussein “was not vanity, but rather jealousy and a victory for Islam.”

When Al-Rafi’i published his book “The History of Arab Manners” and wrote it in a high and discreet language, Taha Hussein commented by saying that he did not understand what was in the book, in reference to the classic of al-Rafi’i.

This comment provoked Al-Rafi’i and wrote a brief letter to Taha Hussein, the text of which is:

Abu al-Tayyib greets you and says to you:

How many
blameworthy words are true and which have blamed them from poor understanding ..

A professor of literature at the Islamic University of Madinah, Abd al-Basit Badr, says that Taha Hussein used to believe that al-Rafi’i was younger than publishing a book of this size, and that he was better than him to do so.

They were different in curriculum and school, and they were both masters and disabled at the same time. Hussein was blind, and Al-Rafei lost hearing.

While Al-Rafi’i fought a “sacred battle” against Taha Hussein under the banner of the Qur’an, his rivalry with Akkad had political and personal dimensions.

When Al-Rafi’i wrote his book on the miracle of the Qur’an, the leader Saad Zaghloul read it by saying, “It is as if it is removed from the revelation and Qasr from the wise dhikr.”

On the contrary, Akkad attacked the book and doubted that Saad Zaghloul liked him to this extent. Al-Rafei responded with a violent attack on Al-Akkad in a book entitled “On the Seafoot,” describing it as the poet Al-Maraheidhi.

The rivalry of the two sides was strengthened when Al-Rafi’i was chosen to occupy the position of the king’s poet, as it was confirmed that he was away from Al-Akkad and his companions from the Wafd Party poets, who were preoccupied with modernity, freedom and revolution.

While Al-Akkad was a real politician, Al-Rafi’i believed that politics took advantage of literature, yet he was not separated from public affairs and national feeling. 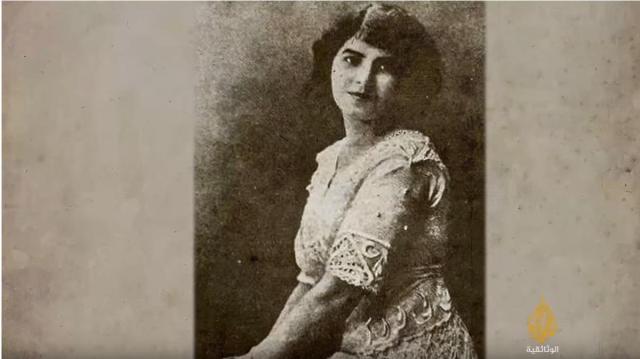 The Lebanese writer May Ziada, who inspired and inflamed the hearts of most Egyptian writers and poets at that time

The literary dispute is not the only basis for the quarrel between writers. Rather, the dispute is over the heart of a beautiful woman with a thin pen, who is fluent in speaking contradiction and is bound by nine foreign languages.

This lady is the Lebanese May Ziadeh, who inspired, inflamed and inspired most of Egypt’s writers and poets at that time without opening her heart to any of them.

Every Tuesday, May Ziadeh organizes a literary salon and brings it with her adornment, perfume, ranting and poetic language, and she gives birth to stories of love and illusion in this majlis.

Mai knew that it was a battlefield between adults, but she chose to play the role of Mahbouba Al-Hamdani, so she pretended that she did not distinguish between her fans because of their large number:

He asked me: Who are you? And she is aware, and
does a boy like me in his condition can we deny?

So I said as she wished and liked her: He killed you! She said: Which one? They are many

Writers say that Al-Rafei was bemoaning that hearing impairment prevented him from listening to May Ziadeh’s hadiths, but he filled the void of voice by looking and focusing on her features.

These features inspired him in many of his works and on the way he proclaimed “rose leaves” and poured the fragrance of language on them in “Hadith of the Moon”, so his feelings were a combination of sadness, love and mysticism.

What tormented you in my heart,
and what I did or my heart did not reap

And in the wings is something that I do not know,
but the people of love call it our heart

My heart beats with its fluctuation,
even if they mention who lives there 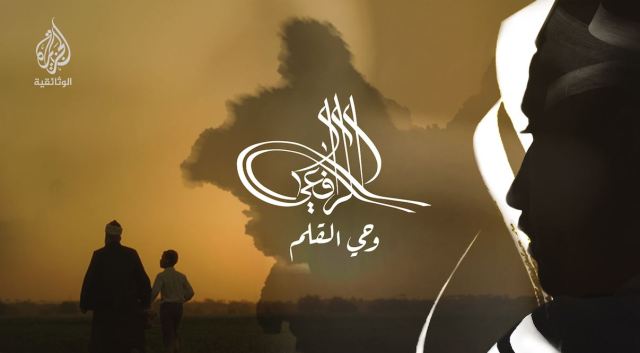 Poster for the movie “Al-Rafi’i … The Inspiration of the Pen”, produced by Al-Jazeera Documentary

And emotional disappointment was not the only one that affected Al-Rafei, but he felt the state’s disregard for his literary and scientific standing.

The current head of the academy, Hassan al-Shafi’i, notes that al-Rafi’i did not receive adequate appreciation for his literary and linguistic standing, and did not occupy an important position in Egypt, and he felt marginalized from the trio who dominated the press at that time, Taha Hussein, al-Aqd, and Muhammad Husayn Haykal.

As for Al-Atoum, he says, “There was a will to marginalize Al-Rafi’i,” while Badr commented, “The injustice of Al-Rafi’i and others with an Islamic orientation.”

When he began writing in Al-Risala magazine, he was no longer self-centered, and his offensive tone diminished, “and he distinguished his peers in the literary article, so the book of the inspiration of the pen came to a generous and rich table.”

On the morning of the tenth of May 1937, Sadiq al-Rafi’i woke up for the dawn prayer and felt a burning sensation, and when he got up, he fell and immediately gave the soul to its righteous man. The height of his heels and his genius in poetry and in prose.